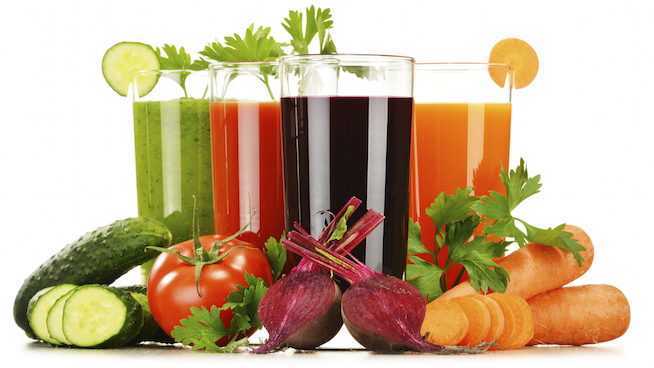 The benefits of juicing goes well beyond just drinking juice from raw fruits and vegetables. Squeezing liquid from plants is as old as the study of agriculture itself. It wasn’t until the 20th century that drinking juice consistently became popular as a tool for improving health. This change came about largely because of the growing popularity of Naturopathic movement and and the invention of refrigeration and juice extractors.

The first extractor was not invented until the early 1930s and was the brainchild of Dr. Norman Walker. Dr. Walker reportedly died at an age greater than 110 in 1984. The original juicer was big and clunky but it made great juice. The next change in juicing didn’t happen until 1955 with the production of the Champion juicer which was the first to pioneer forcing pulp through a screen during the grating process. This reduces the size of the machine to sit on the kitchen countertop and made it more available to the general public.

Many of us have had freshly squeezed orange juice and loved it. But juices sold in the grocery store will lose their active living enzyme activity, which is the main benefit of drinking raw juice. Raw juice will also deliver a boost of vitamins, minerals and living enzymes which help to improve the overall health of the drinker.

Because the body ideally requires 1 pound of vegetables for every 50 pounds of body weight the problem exists in eating enough fruits and vegetables. A benefit to juicing is that it makes these foods easier to digest delivering large quantities of micronutrients with less bulk and in a form most find more than palatable.

Drinking juices that include greens will contain chlorophyll that is very effective in detoxification for our bodies. Chlorophyll helps to improve the function of the liver and can help to rebuild red blood cells at the molecular level. Raw fresh vegetable juices are also extremely alkaline which is highly beneficial to ensure the body does not become over acidic. And acidic environment has been found to be an overall cause of many conditions of the ill health.

Raw juices also gives the body easily absorbed organic materials such as calcium, potassium and silicone. These minerals help the body to restore the biochemical and mineral balance at the micro-cellular level which helps prevent premature aging of the cells and decreases the risk of disease.

This cellular growth also affects skin cells which affects the youthful appearance of facial skin. Choosing raw juice can also increase metabolic rate by providing enzymes that are involved in metabolism. These benefits slow the on set of age-related diseases such as arthritis, heart disease, personal vascular disease and diabetes. It is an incredibly cost-effective and convenient way of maintaining your health and decreasing your medical costs.

This will close in 20 seconds